School of Management faculty continuously push the frontiers of knowledge to positively change the world through scholarship, education and engagement. Last fall, the school welcomed four new additions to its already excellent roster.

Rose M. Hu, CPA, is a clinical assistant professor of accounting and law. Hu teaches auditing and serves as assistant to the department chair and faculty advisor to Beta Alpha Psi. Previously, she was an audit senior manager at KPMG and was involved in designing, developing and instructing several national training courses. Hu earned both her BS and MBA from the School of Management.

She and her husband enjoy travel. Two of their favorite road trips include an East Coast journey down to Key West, Florida, highlighted by a stop at Cape Canaveral to watch NASA launch its last space shuttle mission, and a cross-country trek from Buffalo to Washington state with visits to such national parks as the Badlands, Yellowstone, Grand Teton and Glacier.

Alan Katerinsky, clinical assistant professor of management science and systems, teaches information security, networking and computer fundamentals, IT for business, applied business programming and database management. Research interests include network and cloud computing security, and policy for cybersecurity and international telecommunications. He has worked as a security research consultant in both the private and government sectors, and has an MS in management information systems and a certificate of advanced study in information assurance from the School of Management, as well as a BA from UB.

Off the clock, Katerinsky is a poet whose works have appeared in various small press magazines, and Cringe Worthy Press has published his first collection of poetry, Crossing Paths at Midnight. He is also a (yet-to-be-published) novelist.

Aisha K. O’Mally joined the school as a clinical assistant professor of organization and human resources. O’Mally teaches communication literacy for business. Her research interests are in the areas of business and professional writing, communication in business, health care and business, and health communication. She earned her doctorate, with an emphasis in health communication, from UB. She also has an MS in communication from the Rochester Institute of Technology and a BA in sociology from SUNY Geneseo. In her leisure time, O’Mally loves to knit and crochet.

Nicole Zeftel is a clinical assistant professor of organization and human resources. She teaches communication literacy for business. Her research is in composition and rhetoric, digital pedagogy, 19th-century American literature and the relationship of literature to medicine. She has a doctorate and MPhil from City University of New York Graduate Center, as well as an MA in English literature from UB, and BA in art history and literary studies from the University of Toronto. In the last year, Zeftel finished her PhD, adopted a Chihuahua named Chi Chi, and ran the New York City Marathon. 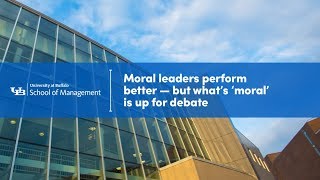 New research is clear: Leaders who value morality outperform their unethical peers, regardless of industry, company size or role. However, because we all define a “moral leader” differently, leaders who try to do good may face challenges.

Jim Lemoine, assistant professor of organization and human resources, and his co-authors examined more than 300 books, essays and studies on moral leadership from 1970-2018 for their study, published in the Academy of Management Annals. They discovered that leaders who prioritized morality had higher performing organizations with less turnover, and their employees were more creative, proactive, engaged and satisfied.

“Over and over again, our research found that followers perceived ethical leaders as more effective and trusted, and those leaders enjoyed greater personal well-being than other managers,” Lemoine says. “The problem is, though, that when we talk about an ‘ethical business leader,’ we’re often not talking about the same person.”

The study showed varying ethical approaches yield different outcomes. For example, leaders who define ‘moral’ as adhering to standards and norms tend to avoid legal scandals, but may exploit the rules to their own ends. Servant leaders—who prioritize doing the most good for the most people—had strong results for customer service and community impact, but may struggle with competing priorities. Finally, independent-minded leaders who follow their own personal moral compass often build innovative, transparent cultures, but may frustrate others who wish they’d toe the company line.

So, which moral philosophy is best? None were consistently better or worse than the others, the study found. Instead, Lemoine says, it’s critical to recognize the positive impact of morality overall and understand how your approach may differ from those of your organization and followers.

“Morality is a great thing to incorporate into your leadership style,” he says. “But just because we consider something ‘moral,’ we can’t assume everyone else does. It’s important to get those differences out in the open and discuss them to avoid misunderstandings.”

When stock market returns are higher than expected, drug companies increase their advertising budgets—and the advertising is more effective—according to new School of Management research.

Published in the Journal of Marketing Research, the study found that the initial valuation of a new drug provides a unique perspective on corporate marketing strategy.

“When a firm plans to launch a new product, it looks for signals on how well a product will be received before establishing a marketing budget,” says study author Inho Suk, associate professor of accounting and law. “For drug companies, information from the capital market’s perceptions of a new drug plays an important role in marketing decisions.”

The researchers analyzed more than 500 drug development projects over the 12 years after the FDA relaxed its regulation on ethical drug advertising on television in 1997.  They focused on drugs targeted for a U.S. launch to analyze corresponding daily stock return data.

Suk says information from the capital market valuations of new products can be used to make decisions even beyond marketing.

“Financial analysts can improve the accuracy of their earnings forecasts, and stock purchase and sales recommendations by taking into account their predictions on the marketing managers’ advertising decisions,” he says. 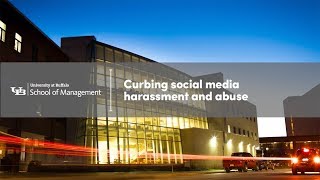 A new system for automatically detecting prejudice in social media posts can help curb abuse and harassment online, according to new research from the School of Management.

Published in Decision Support Systems, the study analyzed online intergroup prejudice—a distorted opinion held by one social group about another without examining the facts behind aversion, hatred and hostility.

“In social media, users often express prejudice without thinking about how members of the other group would perceive their comments,” says study co-author Haimonti Dutta, assistant professor of management science and systems. “This not only alienates the targeted group members but also encourages the development of dissent and negative behavior toward that group.”

Dutta says manual detection of prejudiced social media messages is daunting due to the sheer volume, and systems like theirs can assist with an increasingly important task.

“The prejudice expressed publicly via social media is dangerous because those messages are likely to spread far more rapidly and broadly than private sharing,” says Dutta.

Dutta collaborated on the study with K. Hazel Kwon, assistant professor in the Walter Cronkite School of Journalism and Mass Communication at Arizona State University, and H. Raghav Rao, the AT&T Distinguished Chair in Infrastructure Assurance and Security at the University of Texas at San Antonio College of Business.

Double jeopardy: The high costs of living in Nairobi’s slums

Tenants in the slums of Nairobi, Kenya, receive drastically inferior household services and pay more rent compared to those in its formal settlements, according to new School of Management research.

Published in World Development, the study found the households in Nairobi’s slum areas face significant gaps in public services. In the case of basic services like water, toilet and public sewage disposal, the gaps are as high as 40 to 50 percent. In addition, these residents pay about 16 percent more than their formal area counterparts, when adjusted for housing quality conditions.

Talukdar analyzed nearly 1,200 responses from households in the slums and formal areas of Nairobi to conduct a systematic empirical analysis of the market conditions faced by residents in both areas.

He says the double jeopardy situation could be solved with significant public financing to increase the amount of housing and improve infrastructure, but that solution is impractical based on the current capabilities of a developing country like Kenya.

“The more pragmatic approach relies on combined public and private investments for policy initiatives that would be beneficial to both parties,” says Talukdar. “Specific initiatives could include formalizing tenancy rights, slum upgrading or redevelopment, or regulatory liberalizations in the housing sector.”