BUFFALO, N.Y. -- The JOBS Act is doing its job and getting more startups to go public, according to a new study from the University at Buffalo School of Management.

Forthcoming in the Journal of Financial Economics, the study found that the Jumpstart Our Business Startups (JOBS) Act increased initial public offerings (IPOs) by 21 per year since it was passed in April 2012—a 25 percent increase over 2001-2011 levels. Three-quarters of the new offerings came from the biotechnology/pharmaceutical industry.

Study co-author Michael Dambra, assistant professor of accounting and law in the UB School of Management, says businesses that are heavily invested in product research and development — like those in the biotechnology/pharmaceutical industry — have the most to gain from the JOBS Act.

“Because the JOBS Act allows firms to communicate with prospective investors before disclosing required firm-specific information publicly, companies can defer releasing costly research information to competitors,” says Dambra. “For example, without the JOBS Act, a pharmaceutical company would have to immediately reveal details about drugs they’re working on when going public, allowing rivals to counter with generic options.” 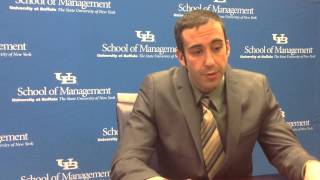 An IPO is the first sale of stock by a private company to the public. The JOBS Act streamlines the process for emerging growth companies—those with less than $1 billion in annual revenue—by exempting them from certain accounting and disclosure requirements and allowing them to communicate with prospective investors prior to a public filing of their registration statement.

Dambra cautions, however, that the recent bull market may have also had an impact on the boom in IPOs and suggests that additional research is warranted.

“While we control for market conditions in our tests, we cannot be certain that our results would hold in a bear market,” says Dambra.