Men are still more likely than women to be perceived as leaders, study finds

Emily Grijalva, PhD, assistant professor of organization and human resources in the University at Buffalo School of Management

“As a society, we’ve made progress toward gender equality, but clearly we’re not quite there. Our results are consistent with the struggle many organizations face today to increase diversity in their leadership teams. ”
Katie Badura, Doctoral Candidate
University at Buffalo School of Management 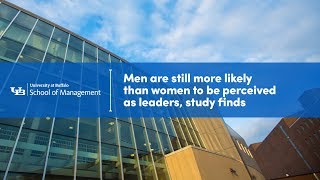 Badura and Grijalva discuss their research and how organizations can apply their findings.

BUFFALO, N.Y. — Women hold just 26% of executive-level positions in S&P 500 companies — and sadly that is no accident, according to a new study by researchers in the University at Buffalo School of Management.

The study, which was made available online in March ahead of publication in the August print edition of Personnel Psychology, found that, on average, men are more likely than women to emerge as leaders.

The research team — led by doctoral student Katie Badura and Emily Grijalva, PhD, assistant professor of organization and human resources in the UB School of Management — aggregated 59 years of research, encompassing more than 19,000 participants and 136 studies from lab, business and classroom settings.

They discovered that although the gender gap has narrowed in recent decades, it still persists.

“As a society, we’ve made progress toward gender equality, but clearly we’re not quite there,” Badura says. “Our results are consistent with the struggle many organizations face today to increase diversity in their leadership teams.”

The researchers primarily attribute the gender gap to societal pressures that contribute to gender differences in personality traits. For example, men tend to be more assertive and dominant, whereas women tend to be more communal, cooperative and nurturing. As a result, men are more likely to participate and voice their opinions during group discussions, and be perceived by others as leaderlike.

“We found showing sensitivity and concern for others — stereotypically feminine traits — made someone less likely to be seen as a leader,” Grijalva says. “However, it’s those same characteristics that make leaders effective. Thus, because of this unconscious bias against communal traits, organizations may unintentionally select the wrong people for leadership roles, choosing individuals who are loud and confident but lack the ability to support their followers’ development and success.”

While group size and participants’ ages did not affect the gender gap, the study found the length of time participants spent together was an important factor in whether men or women emerged as leaders. The longer a group spent together, the less gender influenced who emerged as the group’s leader.

“The gender gap was strongest during the first 20 minutes people were together, similar to an initial job interview, but weakened after more than one interaction,” Grijalva says. “During the hiring process, organizations should conduct multiple interviews to reduce gender bias and ensure they’re hiring the best applicant.”

For managers, the researchers suggest promoting the value of communal behaviors in performance evaluations, prompting quieter individuals to share their ideas and being mindful of any unconscious biases you or your staff may have.

“In the Obama White House, female staffers adopted a strategy of amplifying one another’s comments during meetings and giving credit to the individual who said it first, to ensure that women’s voices were being heard,” Badura says. “Tactics like this help the most qualified individuals stand out and emerge into leadership roles — regardless of gender.”

The project was partially supported through a grant from the University at Buffalo Gender Institute.