Want narcissists to donate to your cause? Make it about them 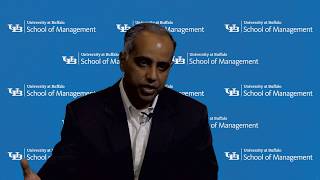 BUFFALO, N.Y. — When narcissistic individuals are able to imagine themselves in a victim’s situation, they are more likely to donate to charity, according to new research from the University at Buffalo School of Management.

The study, forthcoming in Personality and Social Psychology Bulletin, found that appeals explicitly asking donors to put themselves in the recipient’s circumstance were more effective at provoking concern and donations from narcissists than appeals that only described the recipient’s plight.

“It’s the difference between showing the need and asking the donor to ‘stand in someone else’s shoes,’” says co-author Arun Lakshmanan, PhD, associate professor of marketing in the UB School of Management. “Charitable giving is about having empathy — recognizing and responding to the needs and emotions of other people. Narcissists have difficulty with that, so asking them to imagine themselves as the person in need can help elicit genuine concern and, thus, donations.”

Lakshmanan and UB School of Management alumna Esther Kang, PhD ’15, assistant professor of consumer psychology and behavior in the University of Cologne, conducted and analyzed four studies involving more than 1,300 individuals. In the first three experiments, completed online, the researchers manipulated the type of appeal participants received, measured their level of narcissism and asked them to rate their donation intentions. For the final study, they analyzed an actual fundraising campaign for a church-based mission group by sending out two appeals, comparing the donations received for each and surveying the donors.

Past research has suggested that fundraising campaigns should communicate the benefits to others to best generate compassion and donations, but according to Lakshmanan, their study showed that these “imagine-recipient” appeals are not as effective with narcissists.

“Particularly for causes to which donors have little personal connection — an unfamiliar disease, a need halfway around the globe — we recommend using vivid pictures, first-person stories and ‘imagine-self’ language to draw in high-narcissism donors,” Lakshmanan says.

The researchers found the positive effect of “imagine-self” appeals dissipated when it was difficult or impossible for narcissists to project themselves into the recipient’s circumstances, such as with animals or medical conditions that largely affect the opposite gender.

Lakshmanan says their findings may help fundraising professionals engage the imaginations of narcissistic donors and move them to open their wallets.

However, he does not suggest abandoning recipient-focused appeals, as they may be effective at reaching other individuals; in particular, their research showed that “imagine-self” and “imagine-recipient” appeals were equally effective at engaging individuals with lower levels of narcissism.