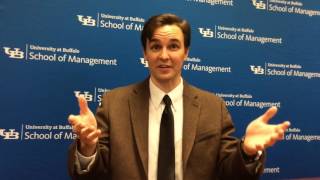 Lemoine discusses the implications of his research and the future of women in leadership.

BUFFALO, N.Y. — It’s no secret that men still hold the majority of leadership positions in American companies. But new research from the University at Buffalo School of Management finds that when male-dominated work groups foster collaboration and communication, it’s women who are more likely to emerge as leaders.

Published in The Leadership Quarterly, the study examined how gender and personality affected who took leadership roles in work groups. In both temporary and long-term work teams with more men than women, the researchers found that as the group became more social, women were more likely than men to seize leadership opportunities.

“Groups choose a leader based on who best exemplifies their shared values. For example, in sports, the team captain is often the best athlete,” says lead author James Lemoine, PhD, assistant professor of organization and human resources in the UB School of Management. “Our results indicate that when work teams value communication and increase their interactions with one another, women may have a leadership advantage.”

Lemoine says this is in sharp contrast to past research showing that men are more likely than women to receive leadership roles partly because of masculine stereotypes like dominance or authoritativeness.

“When we first meet people, we tend to categorize them subconsciously based on snap judgments and observations,” Lemoine says. “But the more we get to know people, the less those preconceived ideas matter.”

The researchers randomly assigned nearly 1,000 participants to small groups and asked them to rate which group members emerged as leaders after performing a series of tasks. They replicated the study with participants of varying ages and with both short- and long-term groups to verify the results.

Interestingly, group collaboration did not impact which gender emerged as leaders in teams with more women.

Lemoine says their findings have important implications for the predominantly masculine C-suites found in today’s corporations, particularly given recent studies by the Peterson Institute for International Economics and Ernst & Young that found an increase in women in management positions corresponded to an increase in company profits.

“Companies need to take a hard look at their processes and culture,” says Lemoine. “Is your team isolated and driven by individual goals? Or are there opportunities for employees to get to know each other and collaborate on projects? When teams foster a culture of open communication and teamwork, it allows new leaders to step forward and diverse perspectives to be heard.”

Lemoine collaborated on the study with Ishani Aggarwal, assistant professor in the Brazilian School of Public and Business Administration, and Laurens Bujold Steed, a doctoral candidate at the Georgia Institute of Technology.