How organizations can boost charitable giving 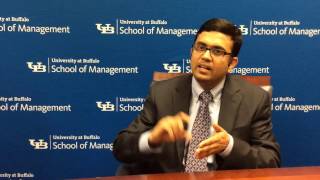 Goswami.
“Our research shows high default amounts do not negatively impact donors’ behavior or attitudes toward the charity or giving in general. ”
Indranil Goswami, Assistant Professor of Marketing
University at Buffalo School of Management

BUFFALO, N.Y. — Charities and nonprofits can increase engagement and revenue by setting suggested donation levels that are appropriate for their donor lists, according to new research by the University at Buffalo School of Management.

“About three-quarters of charities do not use suggested amounts in their online solicitations and those that do tend to set low amounts, often out of fear of backlash from their supporters,” says Indranil Goswami, PhD, assistant professor of marketing in the UB School of Management. “However, our research shows high default amounts do not negatively impact donors’ behavior or attitudes toward the charity or giving in general.”

In a series of studies — including a university fundraising campaign sent to 7,800 past donors and a hypothetical online drive with nearly 3,500 participants — the researchers found a low suggested amount brought in more donors, regardless of the charity and the donors’ age, gender or mood.

“Lower defaults are most effective when organizations are looking to cultivate their donor base,” Goswami says. “Participants who had not previously donated responded positively to lower defaults, saying the recommended amount ‘came from a trustworthy source’ and ‘felt like helpful guidance.’”

On the other hand, for organizations with a strong set of annual donors, asking for a higher contribution can influence donors to give a little more.

“Some people view a suggested amount as a goal set by the organization,” Goswami says. “Those who can’t commit that amount may choose not to donate, but people who identify strongly with your organization’s mission will rise to the challenge.”

Goswami advises nonprofit directors to divide their lists based on donors’ giving history and send targeted messages or hyperlinks with different suggested amounts.

“Instead of looking only at total revenue, examine your donation rate and average donation levels,” says Goswami. “This information will help you understand your audience and tweak your communications appropriately — and potentially raise more money overall.”

Goswami worked with Oleg Urminsky, PhD, professor of marketing at the University of Chicago Booth School of Business, on the study.